The art of Malva reflects his soul. He must express himself through paint “in order to exist” says the artist. “Each canvas is just one expression of my deepest emotions.” Malva uses the canvas to free himself of the pain and suffering he experienced while growing up. Though his father didn’t support his interest in painting, Malva never gave up his dream of being an artist.

Born in 1951 in Tel Nail, a small village of mud cottages in the most northern part of Syria, Malva’s childhood was not one of joy and freedom that many of us remember. Instead, it was packed with the hardships and pressures of helping to support his family. Throughout primary school, he spent the afternoons on the streets selling sweets and during his summer vacations, he worked in the cotton fields. As Malva grew a bit older, he worked at the local cinema each night, painting posters, writing announcements for new films and cleaning the cinema hall.

Throughout this period, Malva’s talent and extraordinary sense of color and form was beginning to be recognized. He started painting with intensity to express his fears, pain and the abominable memories of his childhood. He painted with glaring colors, such as yellows and reds, and used strong brush strokes.

“I was born to be a painter,” Malva says. “My background worked against me, but it only made me stronger. The life of an artist is difficult, but there is no reason to give up.”

The situation at home was unsettling because his father had two wives and Malva felt the pain of his mother. And with the pressures of an authoritarian education, along withhis father’s negative attitude towards Malva’s interest in painting, he eventually left the family at age 17 to begin his career. With 35 oil paintings in hand, Malva traveled to Damascus, Syria, where the Ministry of Education offered him exhibition space at the cultural center. The exhibition created a sensation among the national arts scene, with radio, television and the press reporting on the event.

At the age of 20, Malva was drafted into the military service, but still exhibited often in Syria at the National Museum of Damascus, as well as the National Museum of Alepo. But Malva could not survive on his art alone. He found occasional jobs as an art teacher at several institutes of higher education, as well as work as a graphic designer. He spent many years in graphic design before he moved to Beirut, where he settled with his first wife, and later his three children. But soon after, his wife left him, taking their three children with her. So, he moved to Europe and feeling more isolated than ever, Malva found himself in a new homeland, with a new language, where the local galleries didn’t have any interest in his paintings. Malva felt as if he had hit bottom. It is then that he began painting Impressionist landscapes.

“With time, I have come to recognize that I am looking for myself in the landscape,” explains Malva, “and when I find myself, I paint it.” Malva is his paintings; an extension of his being. He paints his soul. When the artist paints a landscape, he becomes the landscape and then paints himself. He sears and preserves his emotions onto the canvas. “I do not approach a painting, it comes to me. I am trying to discover the secret of the empty white canvas, like a gladiator fights for his life” Malva says.

Showings throughout Europe and the United States raised Malva to international acceptance. His naturalistic style gave way to a new Expressionism and he returned to his childhood memories of Syria, using colors and light. It is then that Malva began to create his inner landscapes. Each painting drew unique values from his rich experiences.

“Over the years, the primitive art with its abstract language attracted me more than the realistic tradition of art, along with ancient cultures and Impressionism, which has been a constant for me for more than 20 years.”

Malva currently resides with his wife, Sylvia, who he says is the first person after work who he needs to be with. “My wife is an artist. She teaches me what love means and to not be alone in hard times.”

Malva says, “I love the moment when I am painting and everything I paint is a part of me. I have a lot on my mind and I need to express it onto the canvas, always feeling like I am out of time.”

Malva’s paintings reflect his courage and commitment n overcoming his early hardships, as well as his current joy and happiness that life has brought, by using bright colors and broad brush strokes. “I will paint until my last days on earth because I must paint to exist” he says. 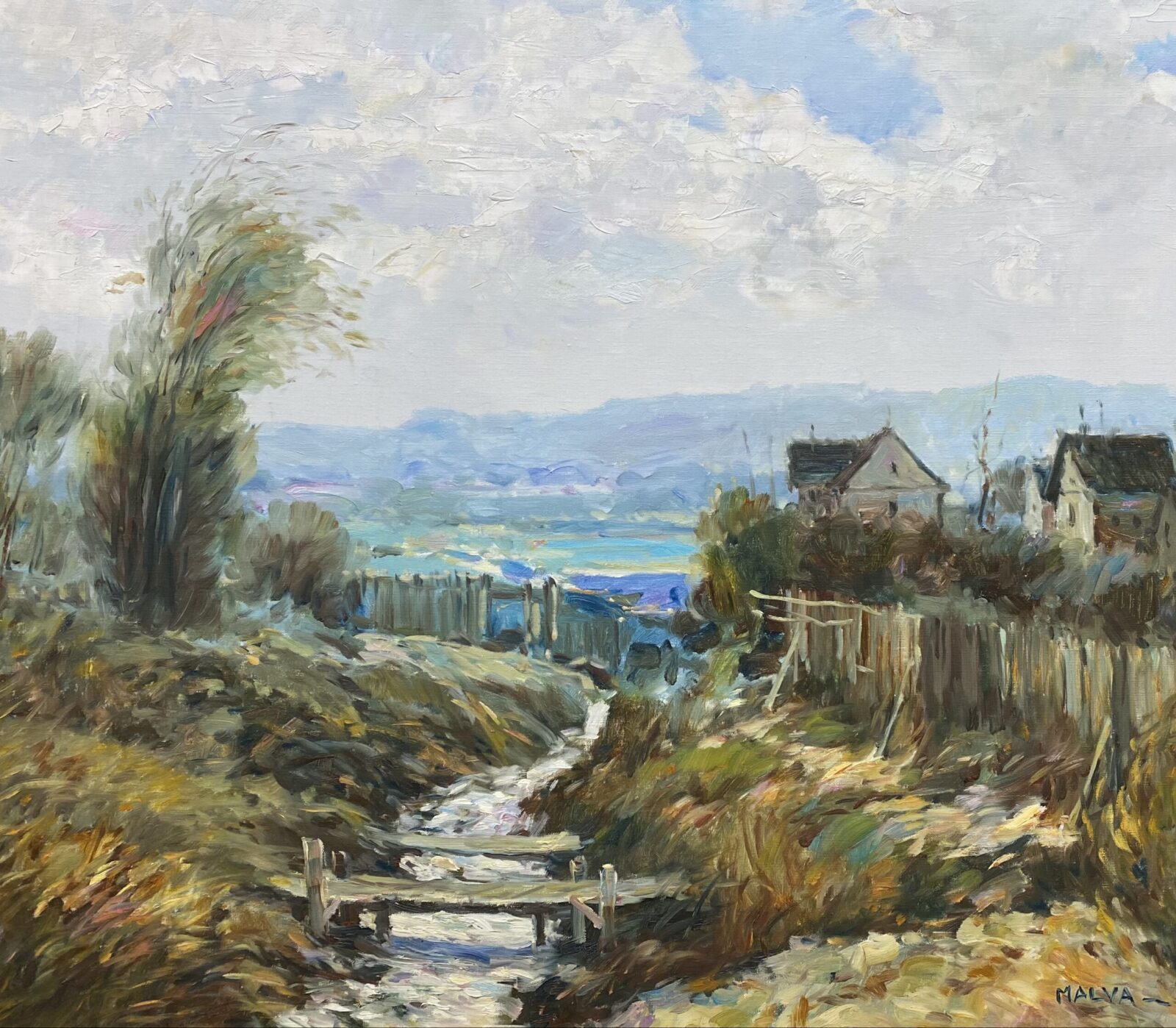 A serene sky, mountains in the misty distance, and the water view at the edge of the village rendered in Malva’s unparalleled impressionistic style! 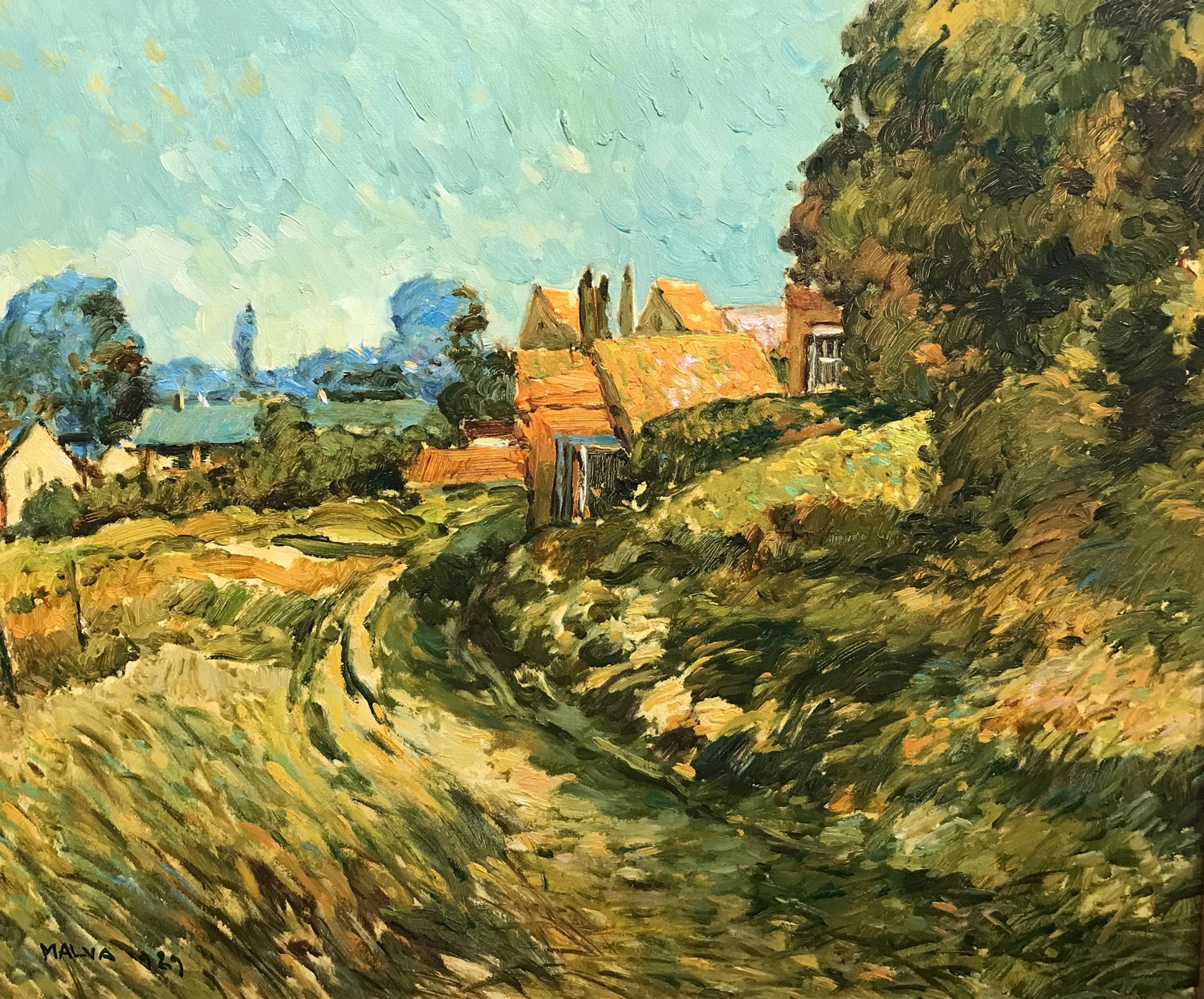 Malva went all out on this gold and yellow rendition of a countryside. It is totally captivating. Even the frame makes it look like it is straight from the Louvre. 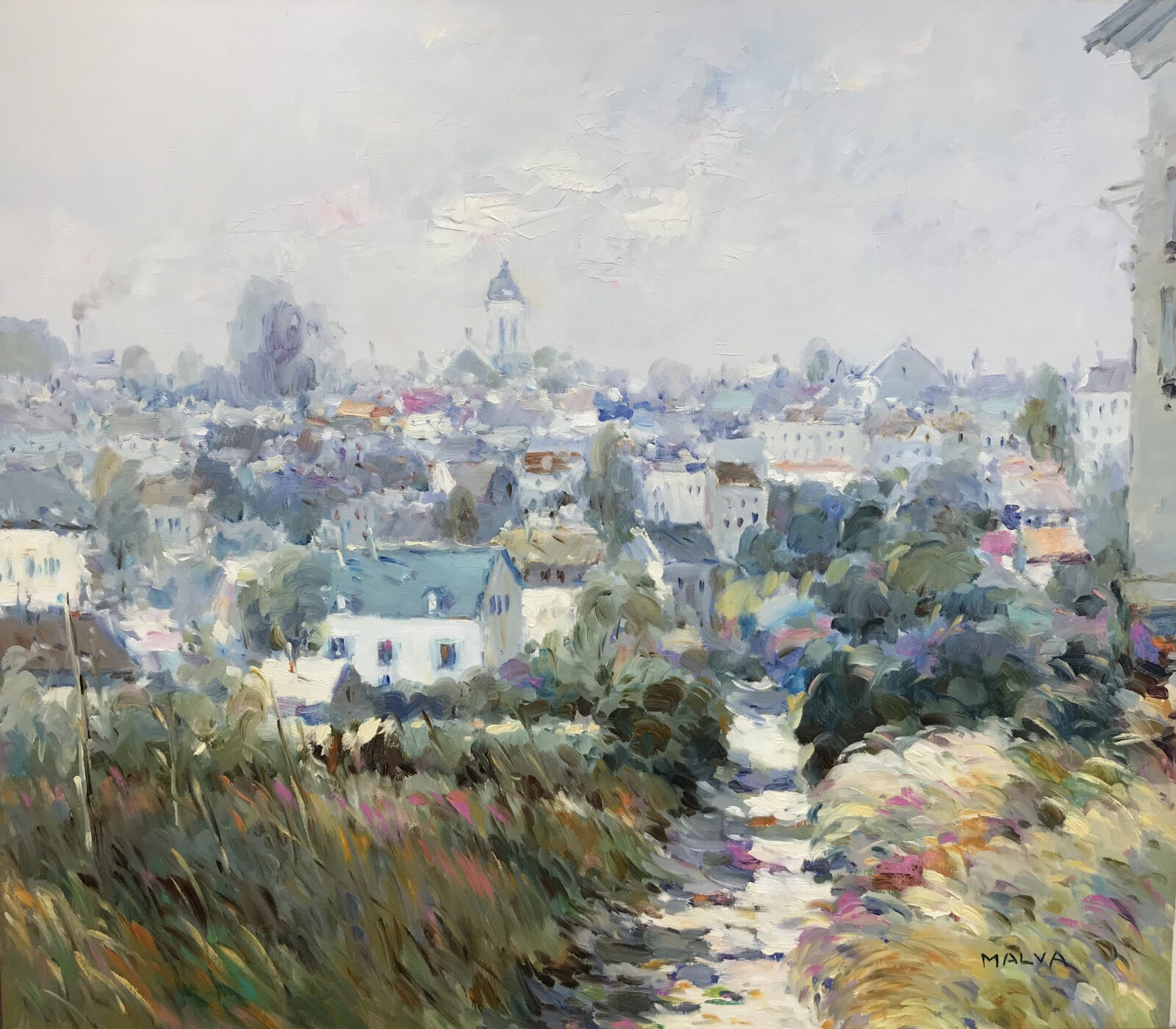 A gorgeous subtle example of Malva’s strokes and colors! His energy is caught in oil.

A village aching for a visit.  Nestled beautifully.  Perhaps a lovely dinner of fresh fish? 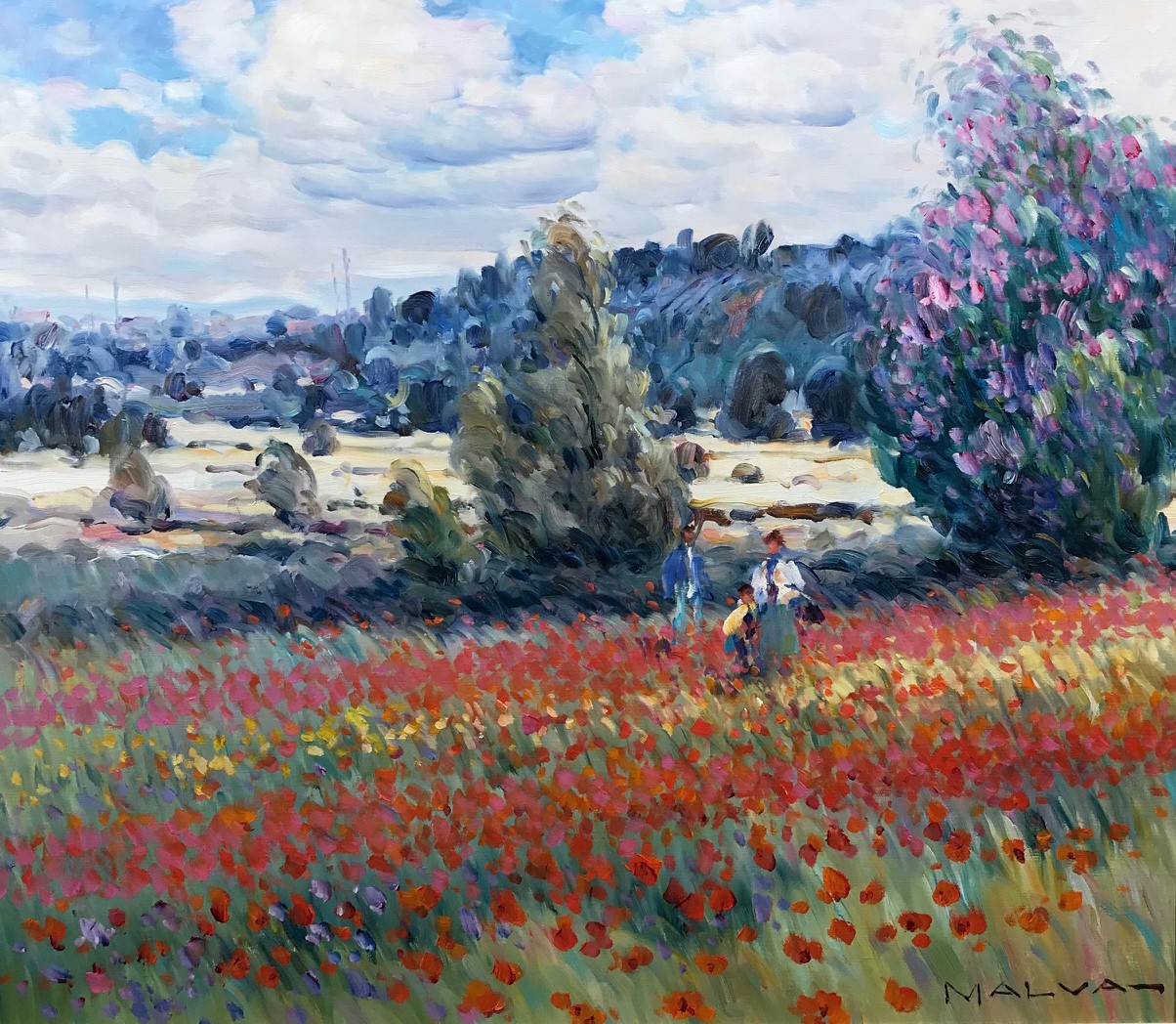 A gorgeous example of Malva’s strokes and colors! What better way to express poppies in a field than with the magic hands of Malva. 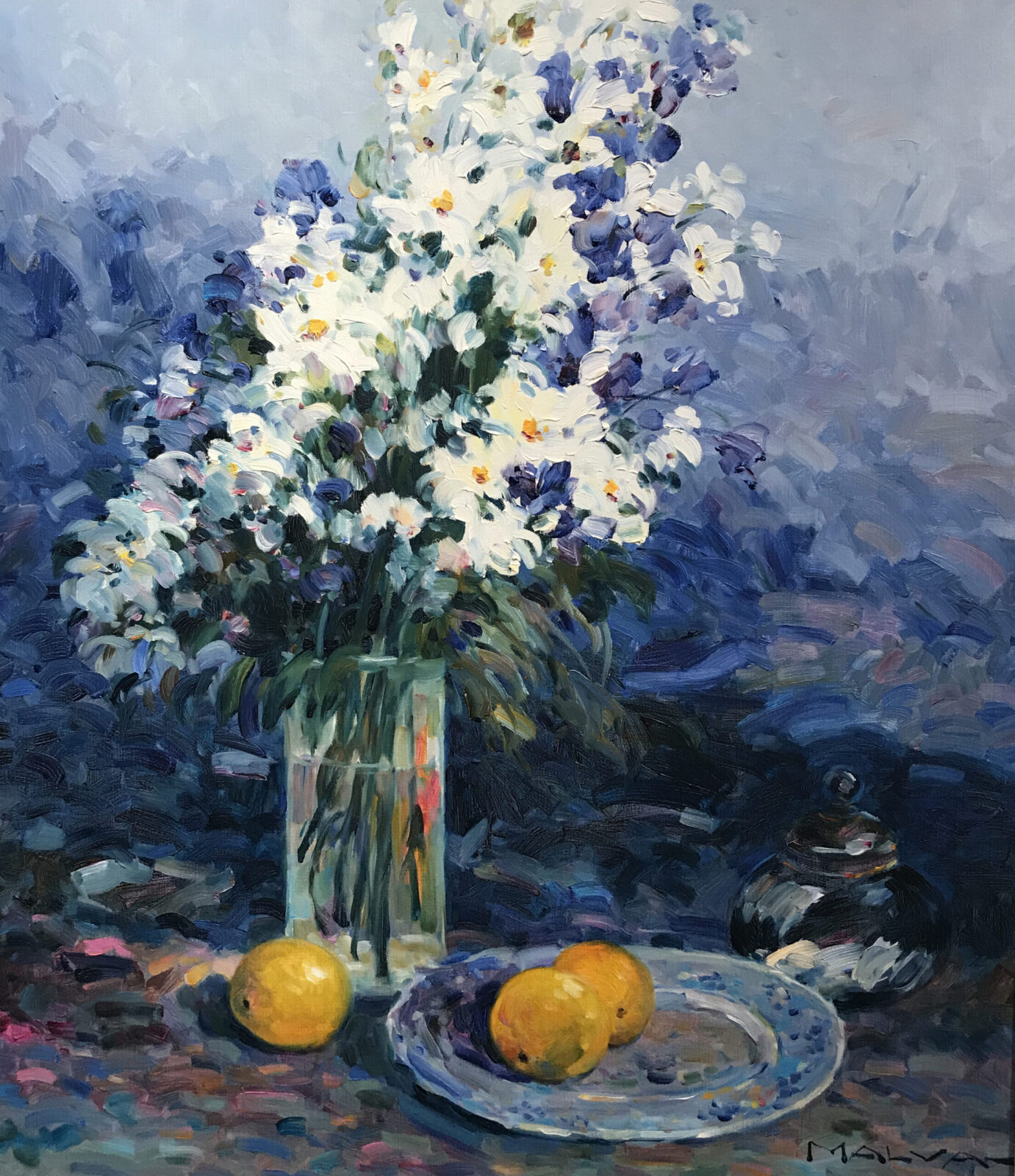 BRIDGE FROM LONG AGO

This is the largest Malva in the gallery and personifies the European countryside with all the history that accompanies it. 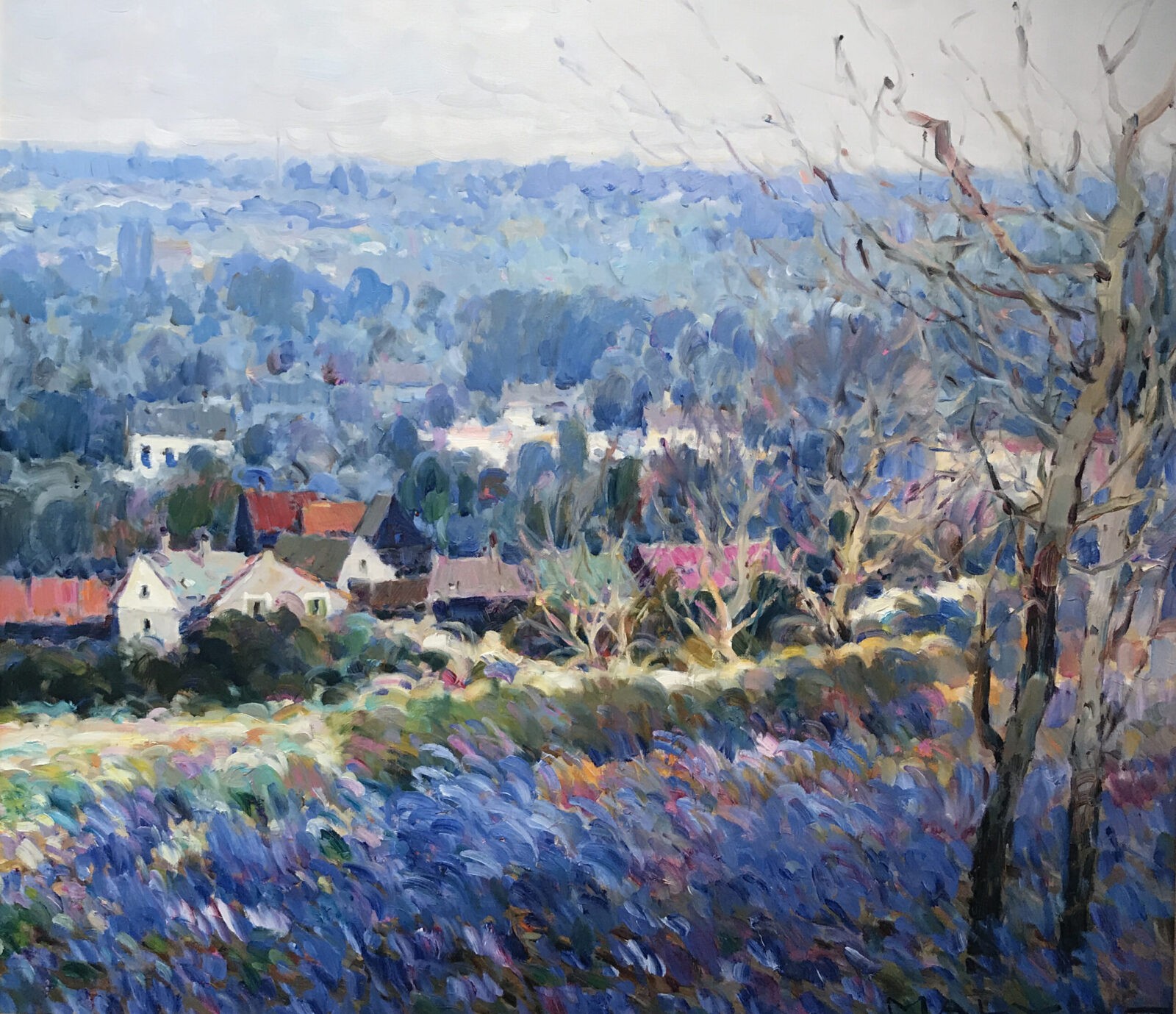 A lovely depiction of a small village. But what really sets this painting into your memory is the lovely blend of blues and purples in the foreground.