LEONARD MIZEREK, nurtured his artistic love of nature while growing up in the Brandywine Valley. As a young boy, he often went painting along the Brandywine River, deriving inspiration from the countryside of nearby Pennsylvania. His early influence was with the New Hope   Impressionists School.

Leonard was three times awarded Artist in Residence at the Museum Yvonne Jean-Haffen in Dinan, France. He painted the area for a month and Three of his paintings was made part of the museum collection. He was featured on the cover of American Artist Magazine. He was invited as one of 27 nationally recognized contemporary marine artists to exhibit in a special five museum exhibition, which toured New England to the Newport Art Museum, the Maine Maritime Museum and Connecticut River Museum. In addition, he exhibited in the Coos Bay Museum of Fine Art and the Cape Museum of Fine Art. In Addition, in the collection of Minnesota Marine Art Museum.

Leonard was elected as one of 75 members of the prestigious Guild of Boston Artists. He is an Artist Member of the National Arts Club where he was awarded the Saltzman Excellence in Painting Award. He is one of 28 Fellows of The American Society of Marine Artists where he was awarded The “Ironman Award”, the highest honor given by the Society as one of only 7, in Societies 45 yr. history. He is also Signature Artist Member of the New England Watercolor Society, Connecticut Watercolor Society, Northeast Watercolor Society and the International Society of Marine Painters. He resides in Westport, CT.

Past exhibitions include: Over 50 Solo Shows and Featured Artist Exhibits. The Mystic Seaport Museum. He has exhibited in the Annual Mystic International since 1988 and the Annual Modern Marine Masters Exhibitions at Mystic Seaport. The American Society of Marine Artists Exhibitions at the Muscarelle Museum, Williamsburg, VA, the Delaware Art Museum, The Frye Museum of Art, Seattle, WA, The Mariner’s Museum, Norfolk, VA, The Cummer Museum, Jacksonville, FL, San Diego Maritime Museum, Two exhibitions at the National Academy of Design in New York, Operation Sail, Boston, First Place in the Sea Heritage Marine Exhibition, He graduated with a BFA from Virginia Commonwealth University and studied at The New York Art Students League under nationally known artist, Nelson Shanks. He also studied at the National Academy of Design under internationally known artist, Raymond Kinstler. Also Studied under Famous Artist, Don Stone .

Leonard was one of the 15 artists to paint at the Forbes Ranch in Colorado. His work is in Forbes permanent collection, American Yacht Club collection, Lexmark International, Bell Hellicopter, Encore Bank, Berwind and other corporate collections. Leonard was recently featured in Fine Art Connoisseur Magazine 2016 and American Art Collector. He is also featured in the books, Painting Ships, Shores, & the Sea,Make Your Watercolors more Professional, Gallery of Marine Art and Bound for Blue Water. He was included in magazine articles in Maine Boats & Harbors, Plein Air, Marine Art Quarterly, and Sea History and Soundings Magazine. 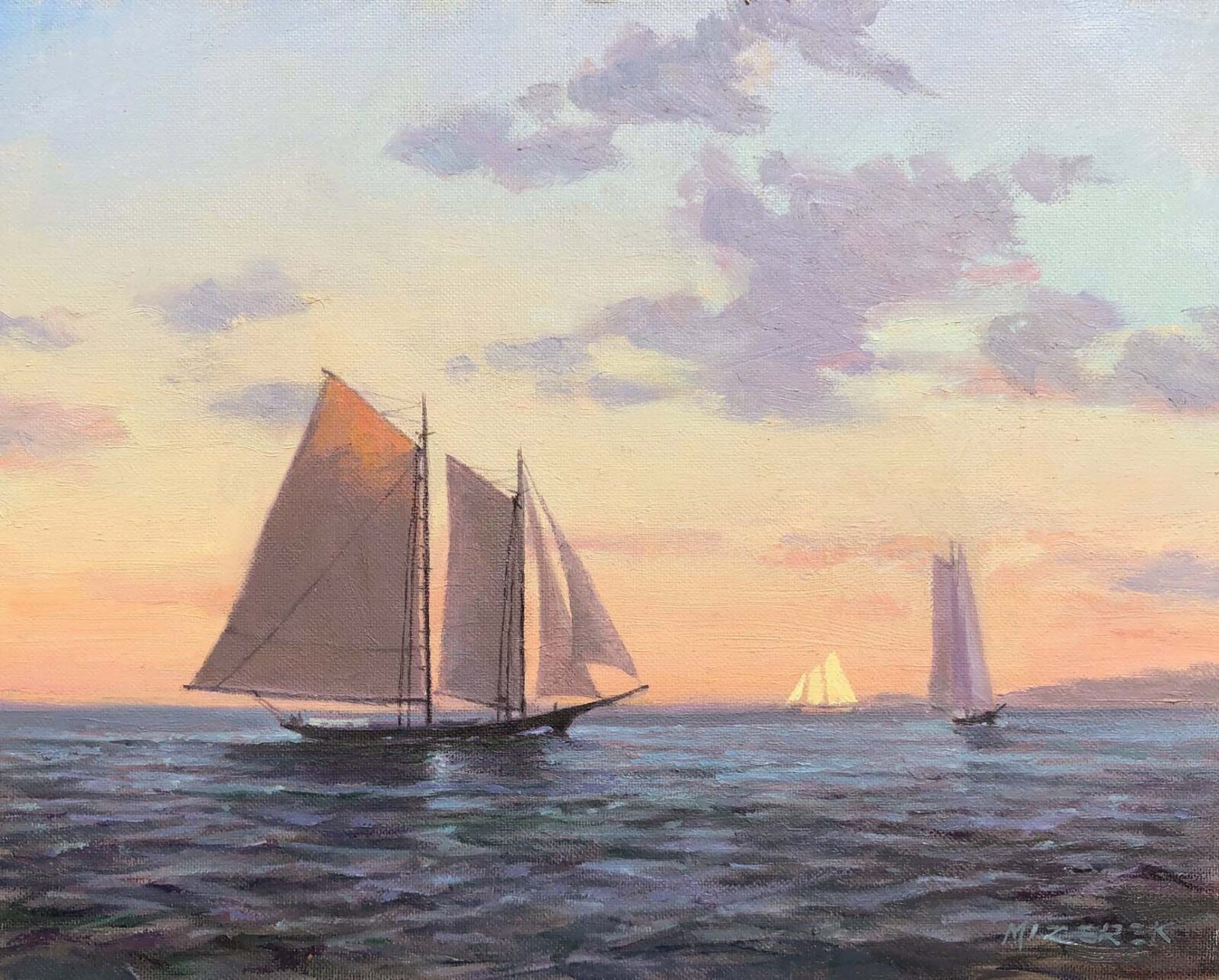 Leonard’s lovely serene and relaxing views of the sailing life are most compelling. A great job.

A lovely ocean view for those who miss the waves and sea breeze!

AS THE SUN SETS

A new oil that you will view immediately as you enter the gallery. Very….very pleasing!!! 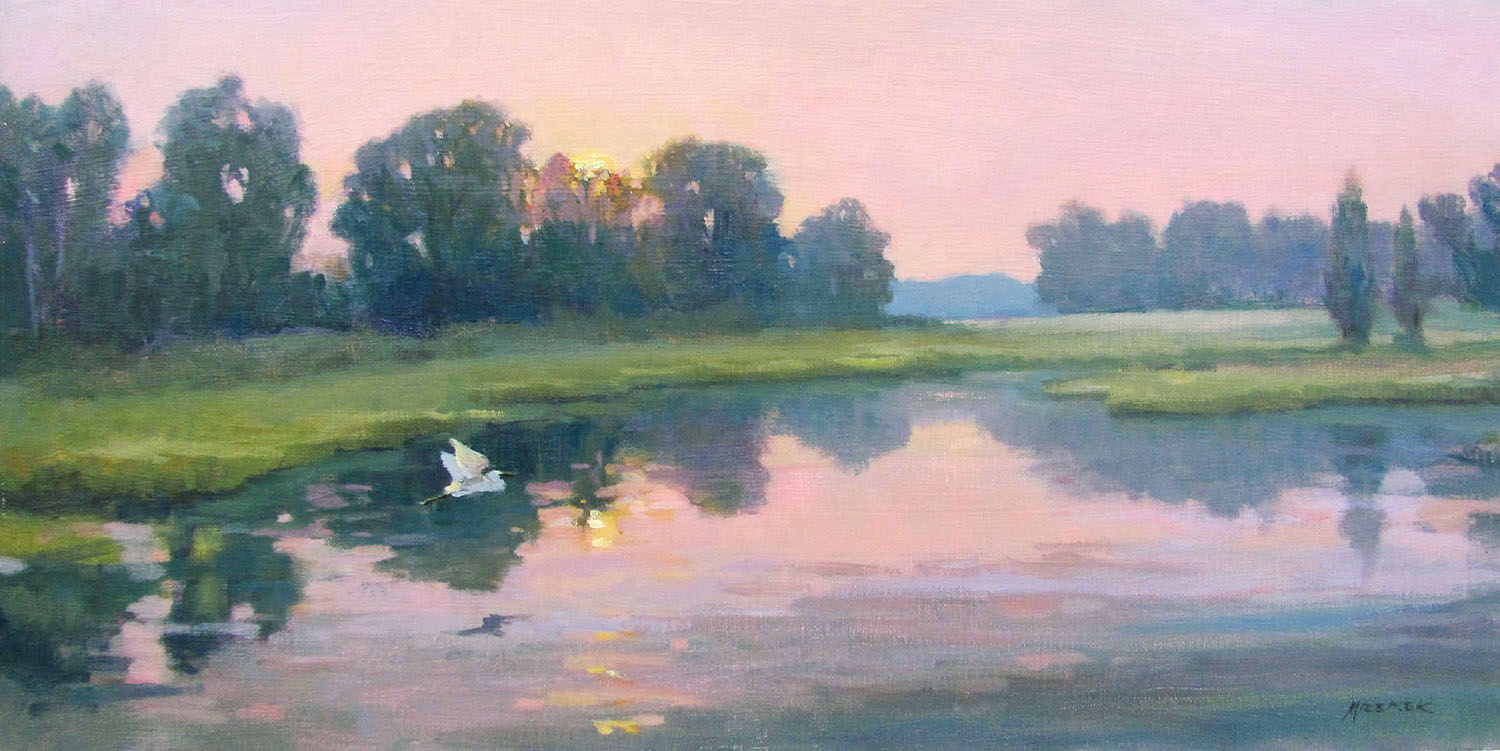 SUN RISING ON THE MARSH

A piece by Leonard Mizerek fresh off the easel….and I think it is GREAT! 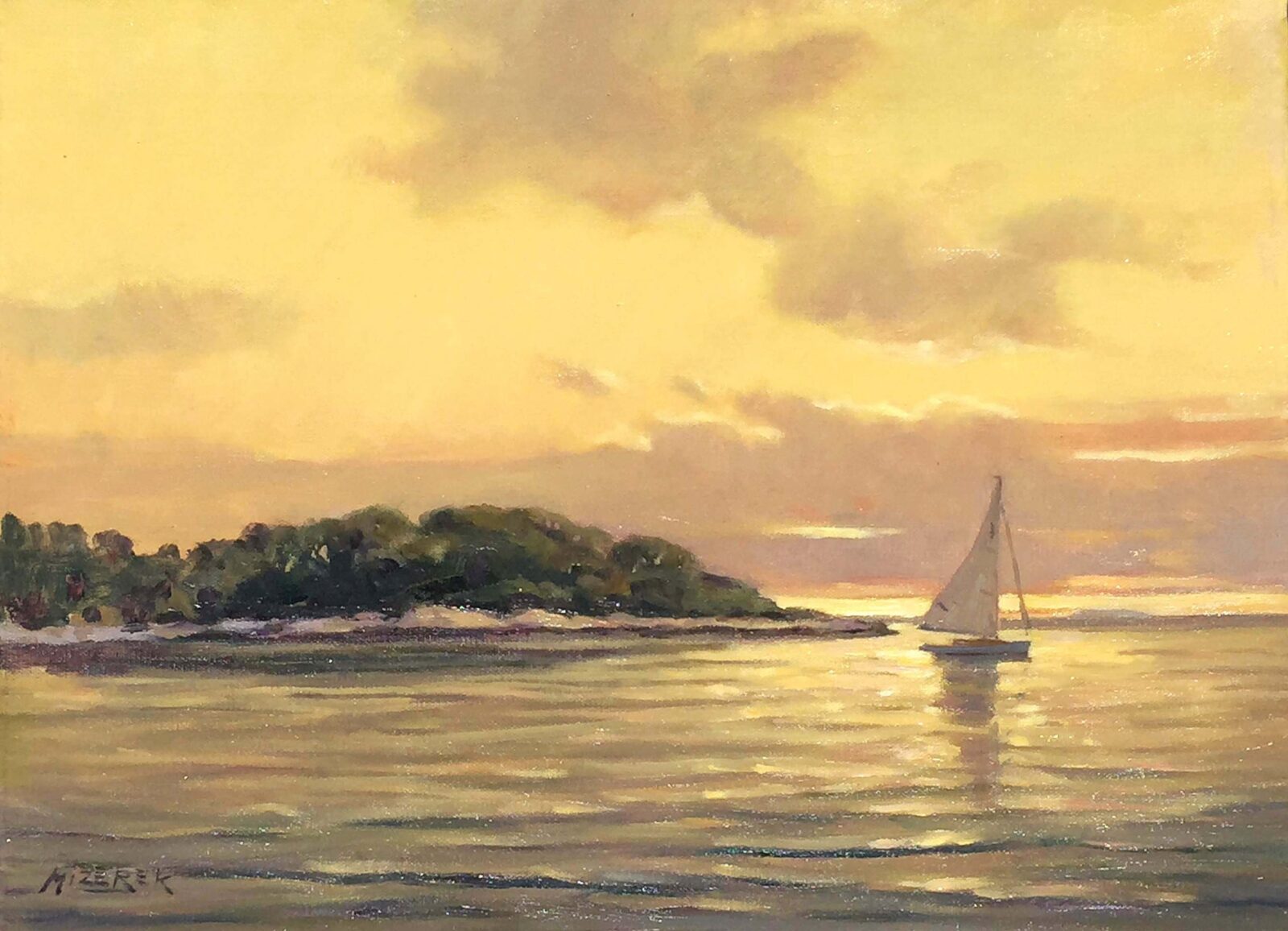 SUNLIGHT ON THE SHORE

A sweet rendition of the summer sunset we all want to remember! 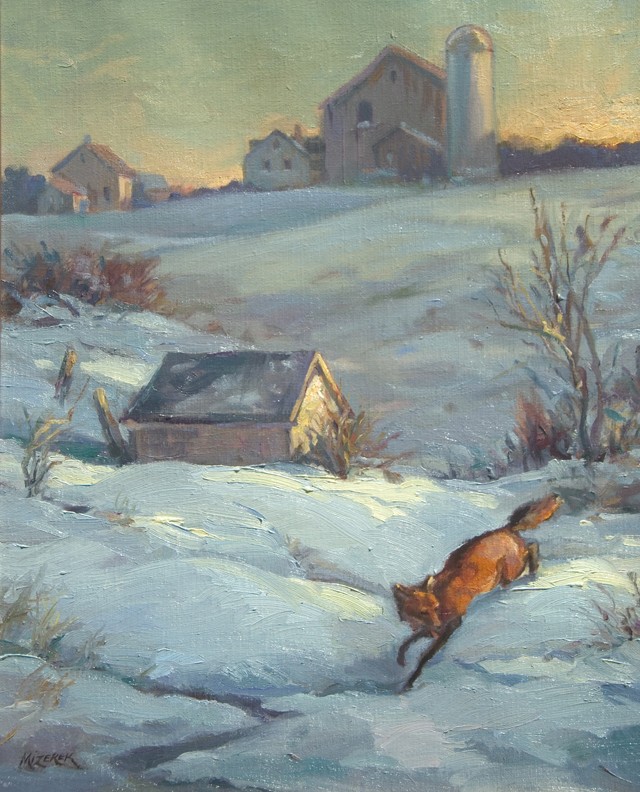 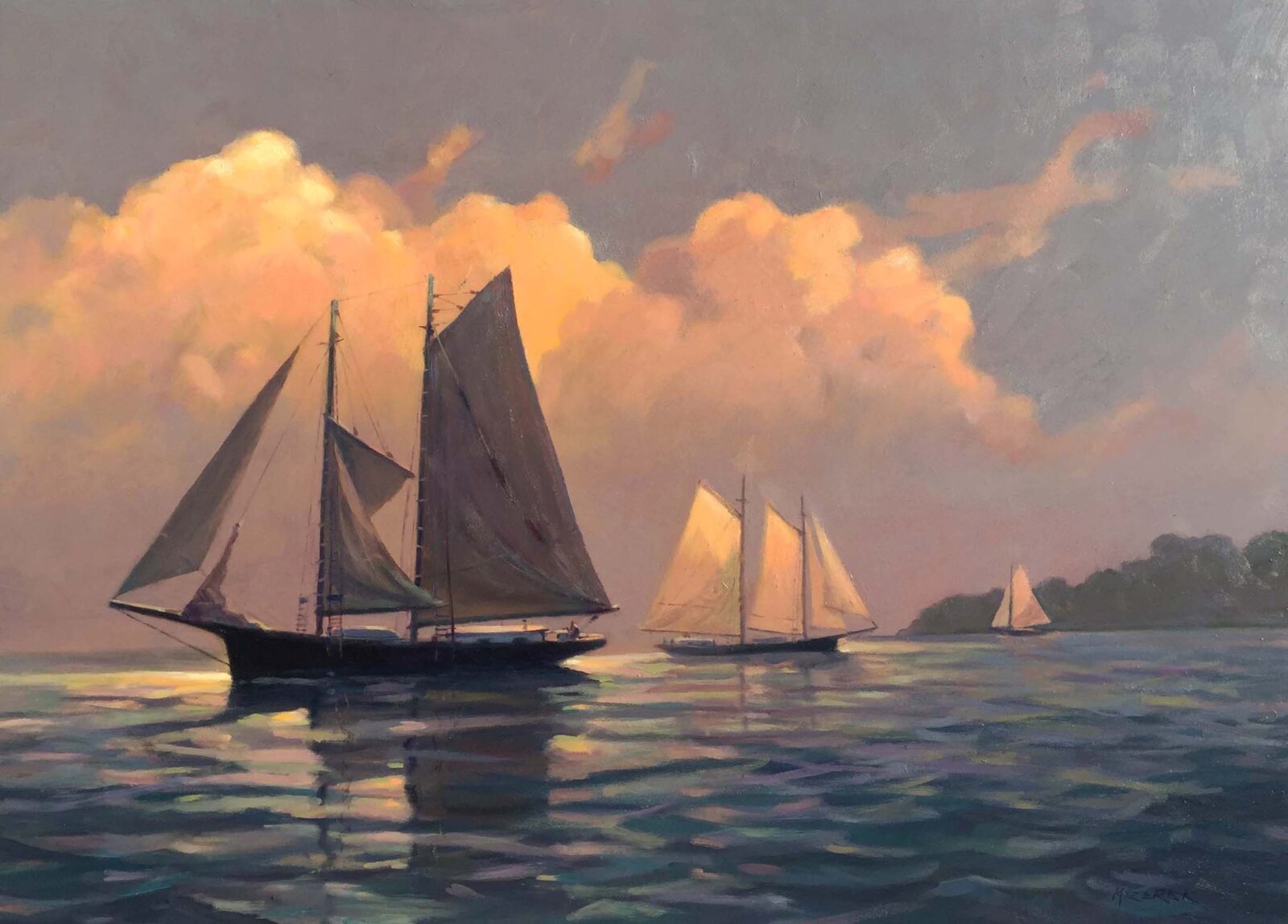 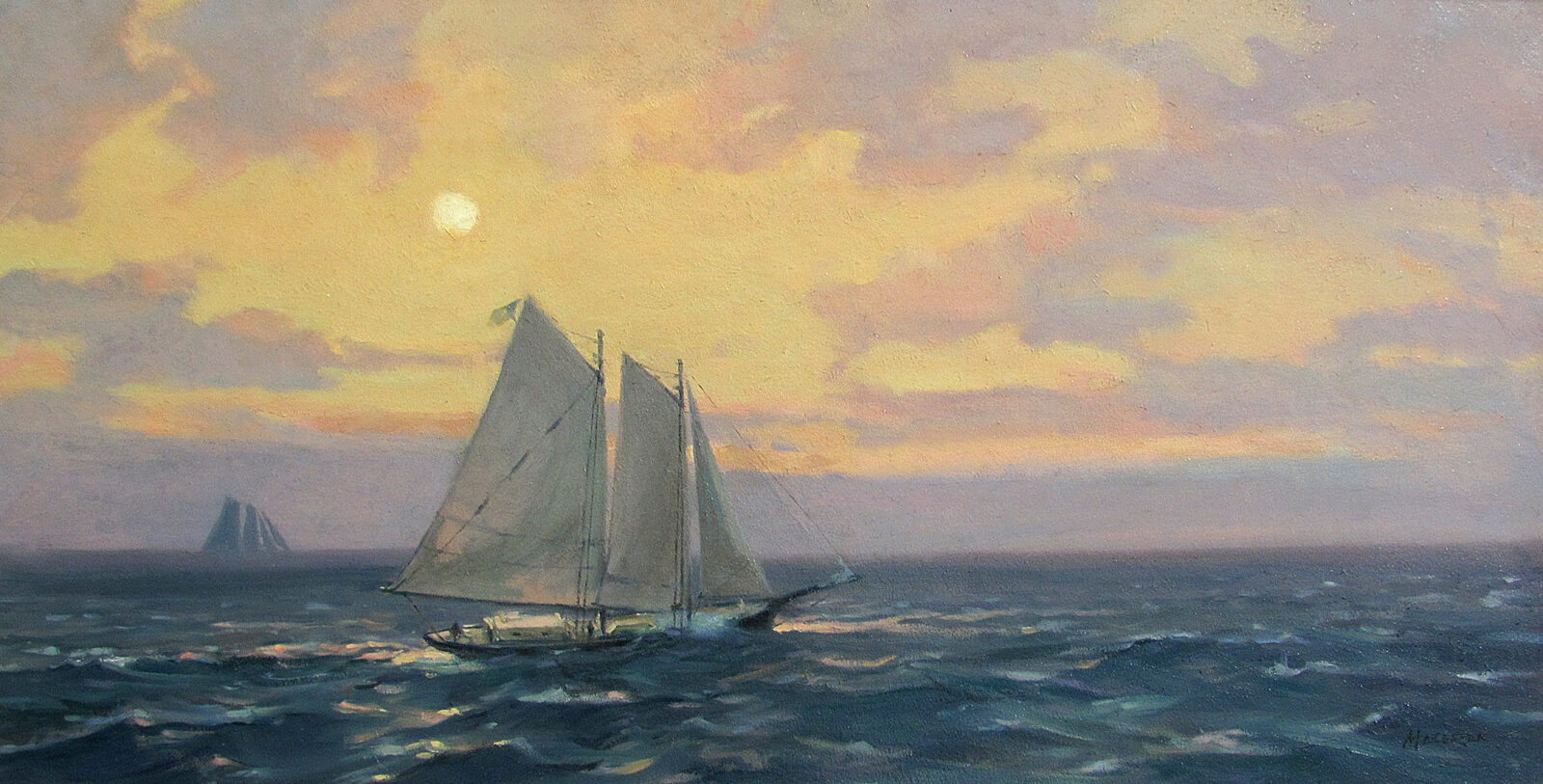