Born and raised in San Francisco, Doug Smith was fortunate to have talented, creative parents who recognized his own talent from an early age and encouraged him to pursue his art. His mother, herself an accomplished impressionist painter, exposed him to the wealth of San Francisco’s art exhibitions as a youngster, introducing him to the masters in their regular visits to the city’s outstanding museums. By age nine he had sold his first oil painting.

After service in the U.S. Army, Smith returned to San Francisco and joined a firm as a graphic designer. The company relocated to Southern California and he continued his training at the Art Center College of Design and the California Art Institute.

Throughout his long and successful career in graphic design and art direction, Smith continued to paint and allowed his artistic “voice” to evolve. In 2000, he made the transition to focusing full-time on his passion for painting.

His signature body of work has garnered enthusiasm and interest from private collectors worldwide as well as museums including the Rockwell Museum in New York and the Booth Western Art Museum in Atlanta for their permanent collections. 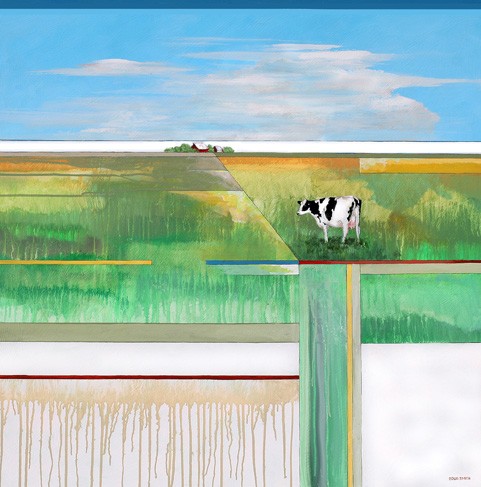 Price:$6600
Medium: Acrylic on canvas covered panel
Size: 36 in. x36 in.
Finally a COW. What is a Vermont painting w/out a cow??? I have asked Doug for a Vermont Cow and here is Molly. I don’t think she is missing…..I think she is on a bit of an adventure!!! 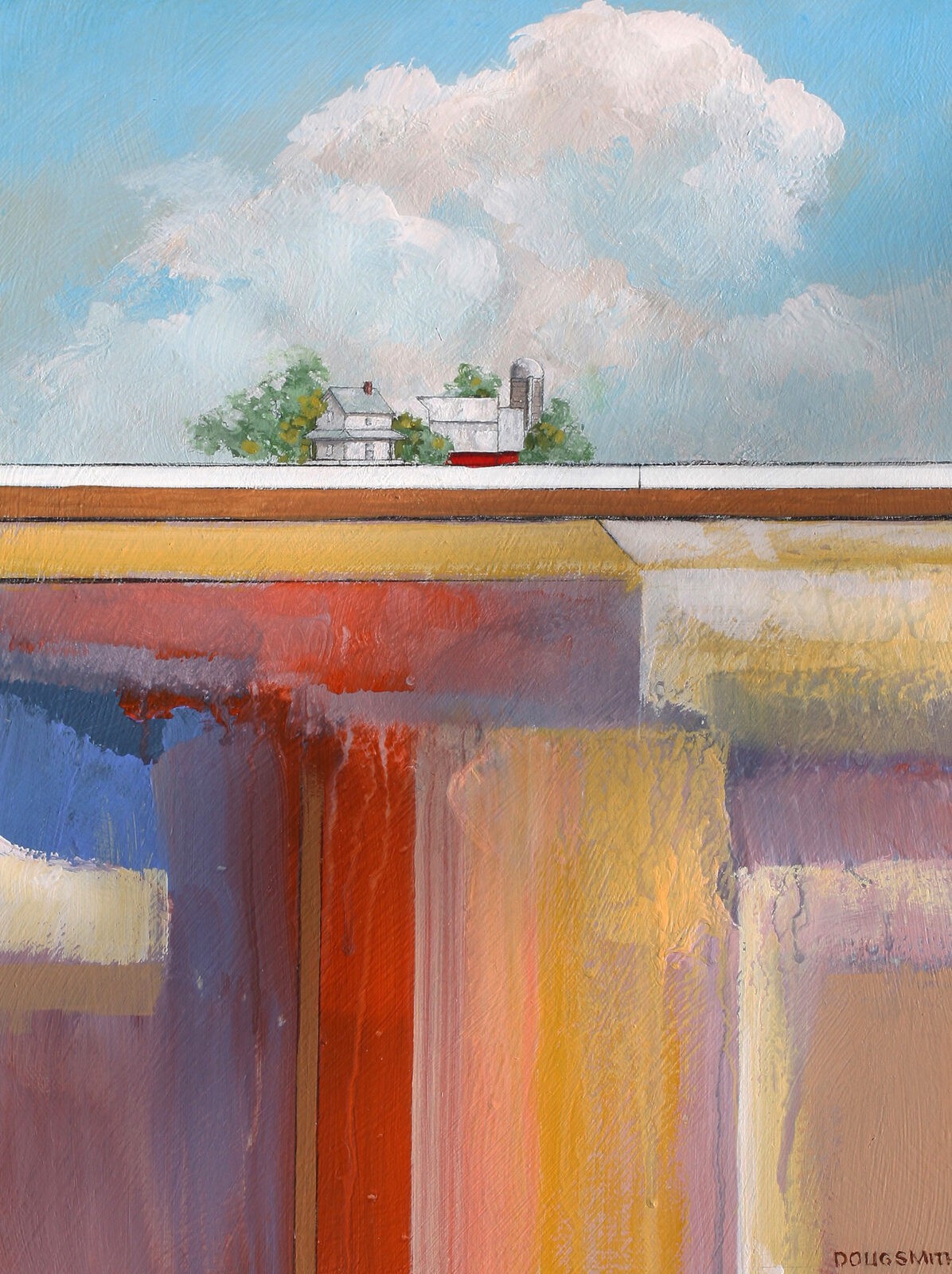 Price: $1800
Medium: Acrylic on canvas covered panel
Size: 12 in. x 16 in.
All that I feel with this smaller pieces is happiness. The color choice is very uplifting as only Doug can make happen. 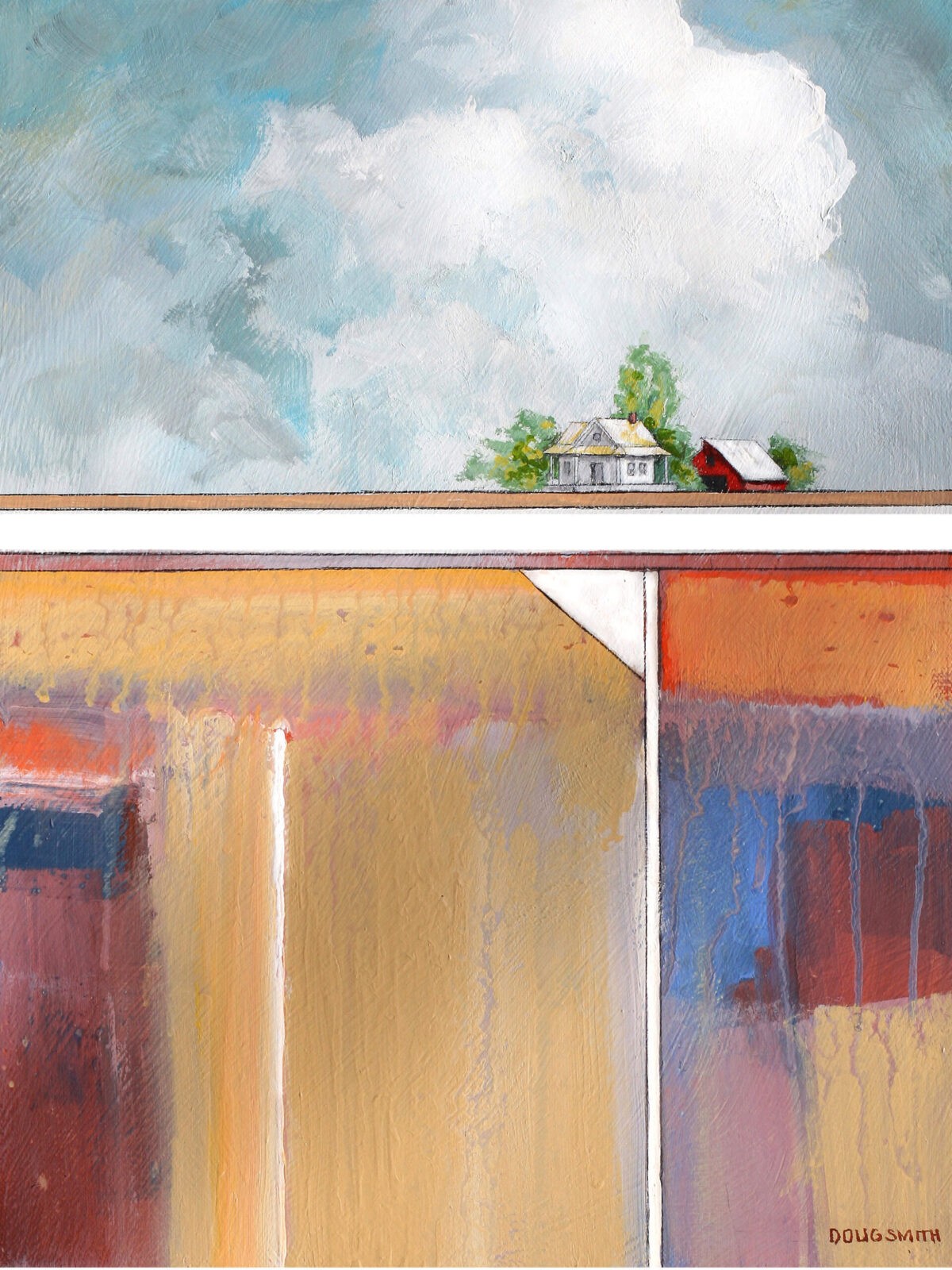 Price: $1800
Medium: Acrylic on canvas covered panel
Size: 12 in. x 16 in.
A perfect size for a focal point in a room.  Doug’s colors get more exciting with every painting. 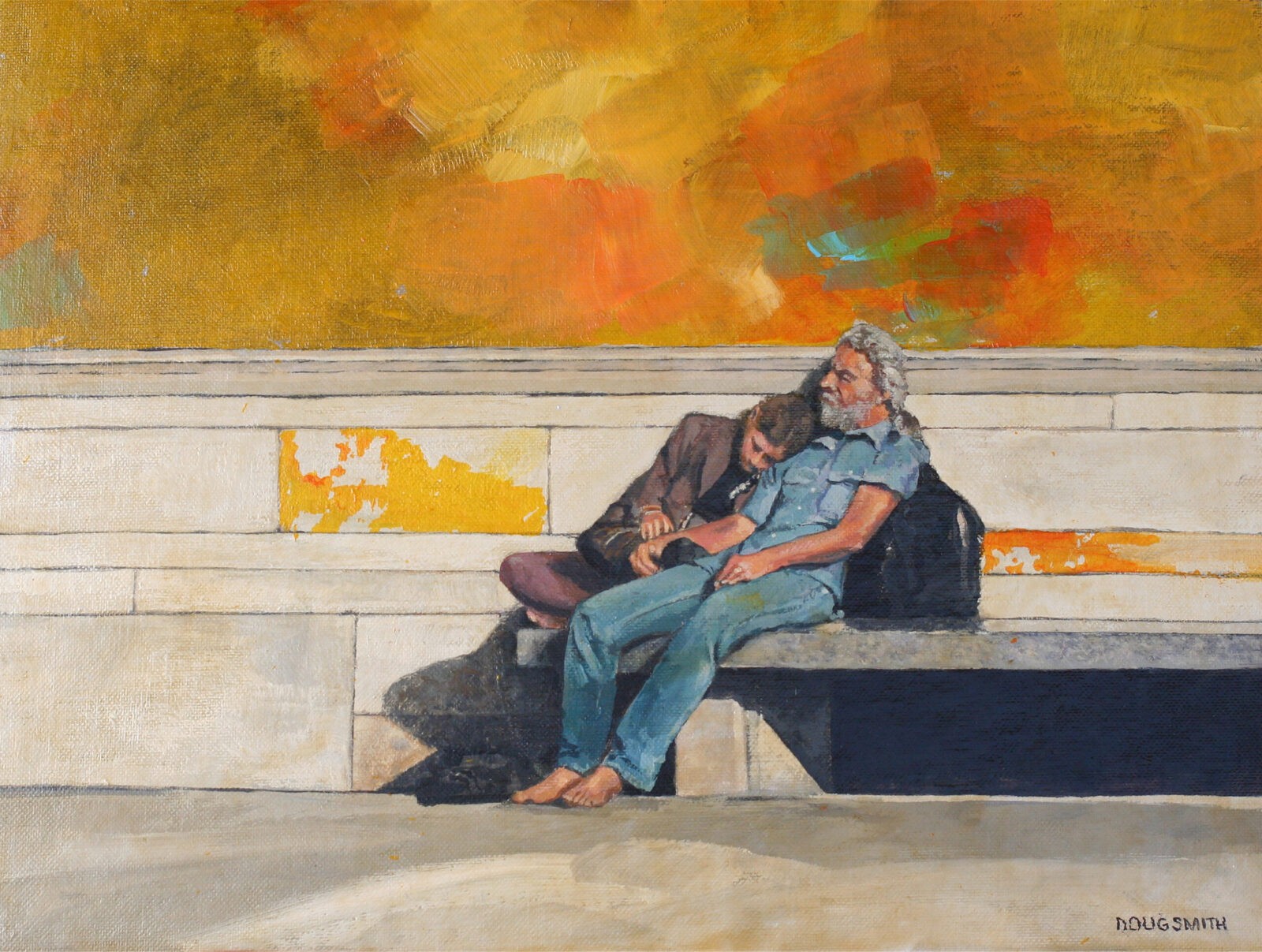 Price: $1800
Medium: Acrylic on canvas covered panel
Size: 12 in. x 16 in.
A wonderful variation from Doug Smith’s more typical expression. Rest Stop surely shares the feeling that one has in a museum or after satiating your mind with an exhibition…..or a shopping trip…..or any number of reasons we might wish to pause and rest together after a lot of walking. I love this piece. 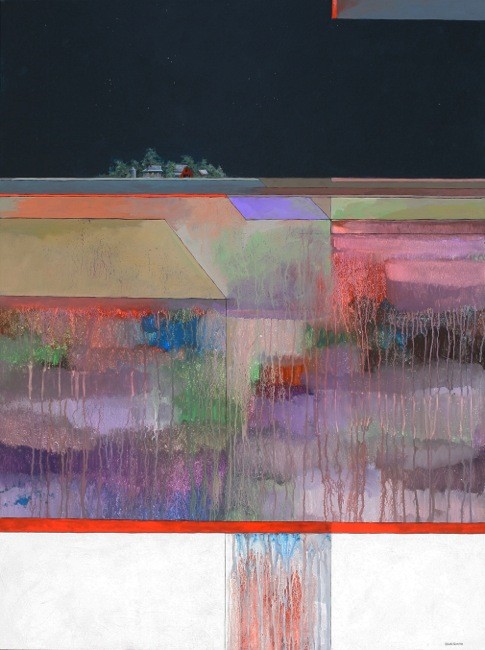 Price: $7,300
Medium: Acrylic on Linen
Size: 48 in. x 36 in.
A salute to all farmers who do rise before the light and end their day sometimes in the dark as well. 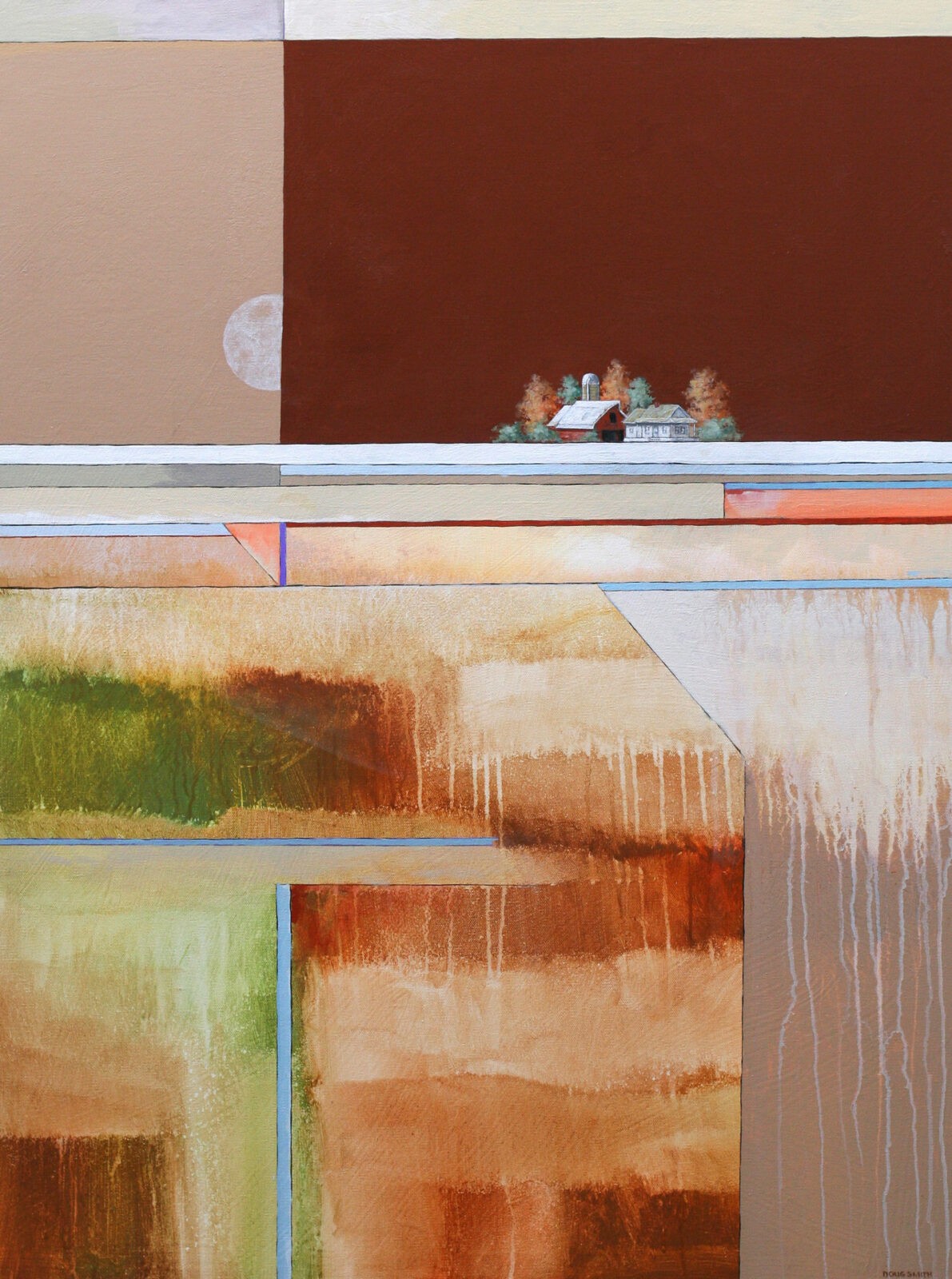 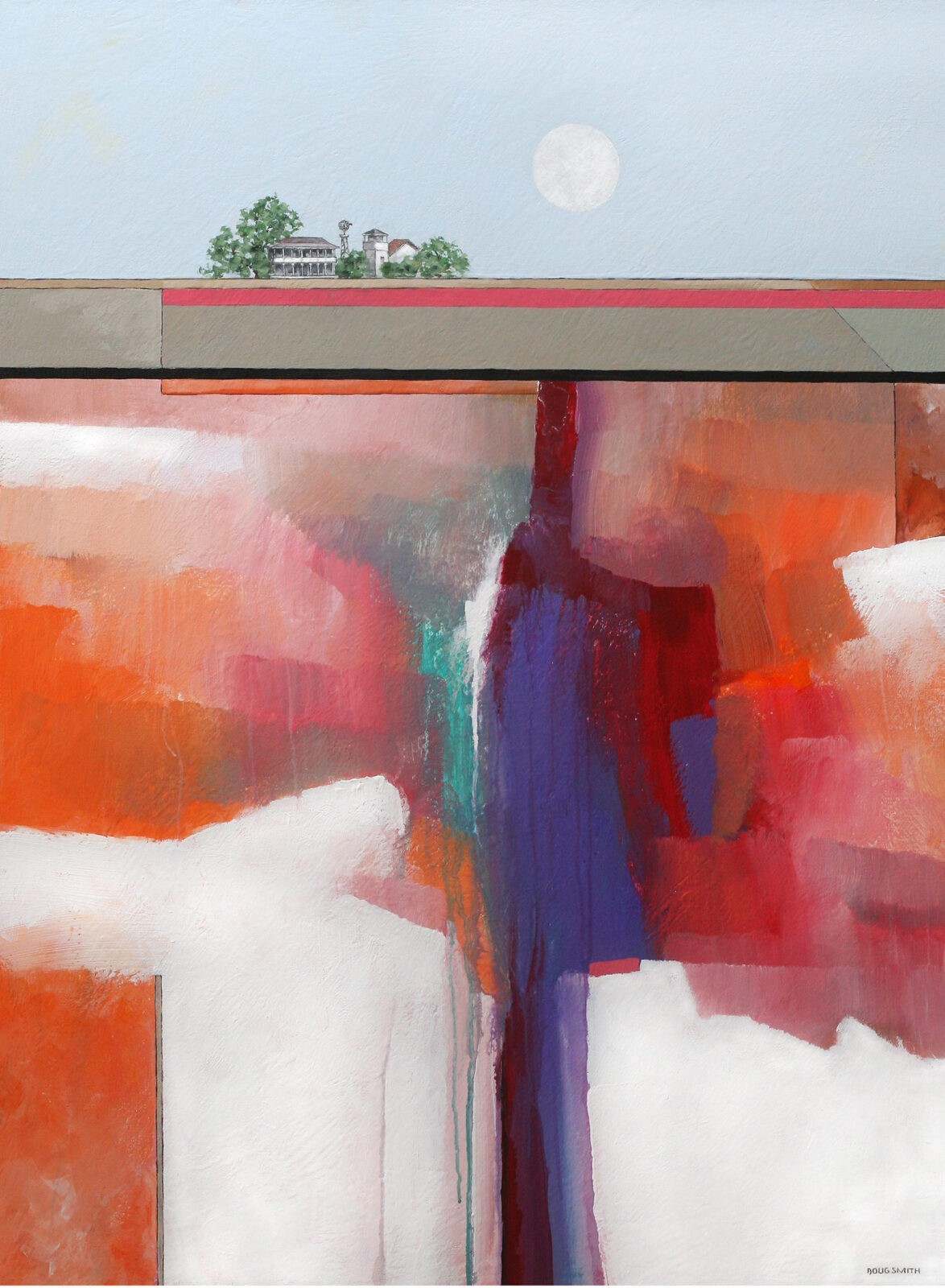 Once again Doug Smith provides a stunning and vibrant piece showing a moon and dwelling. His pieces amaze all who view. 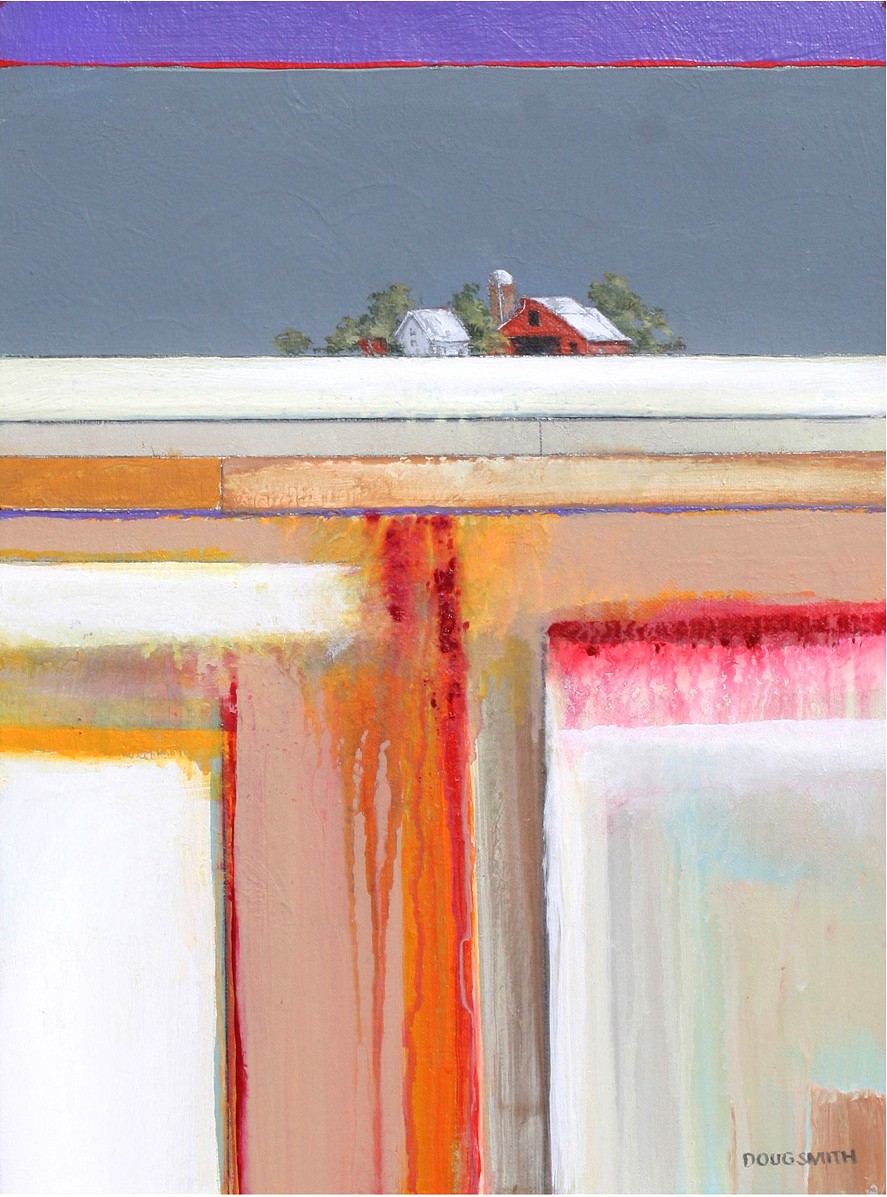 NO TAKE OUT TONIGHT

With a wintry surround Doug shows a cozy little farm with a homemade meal in the plans. 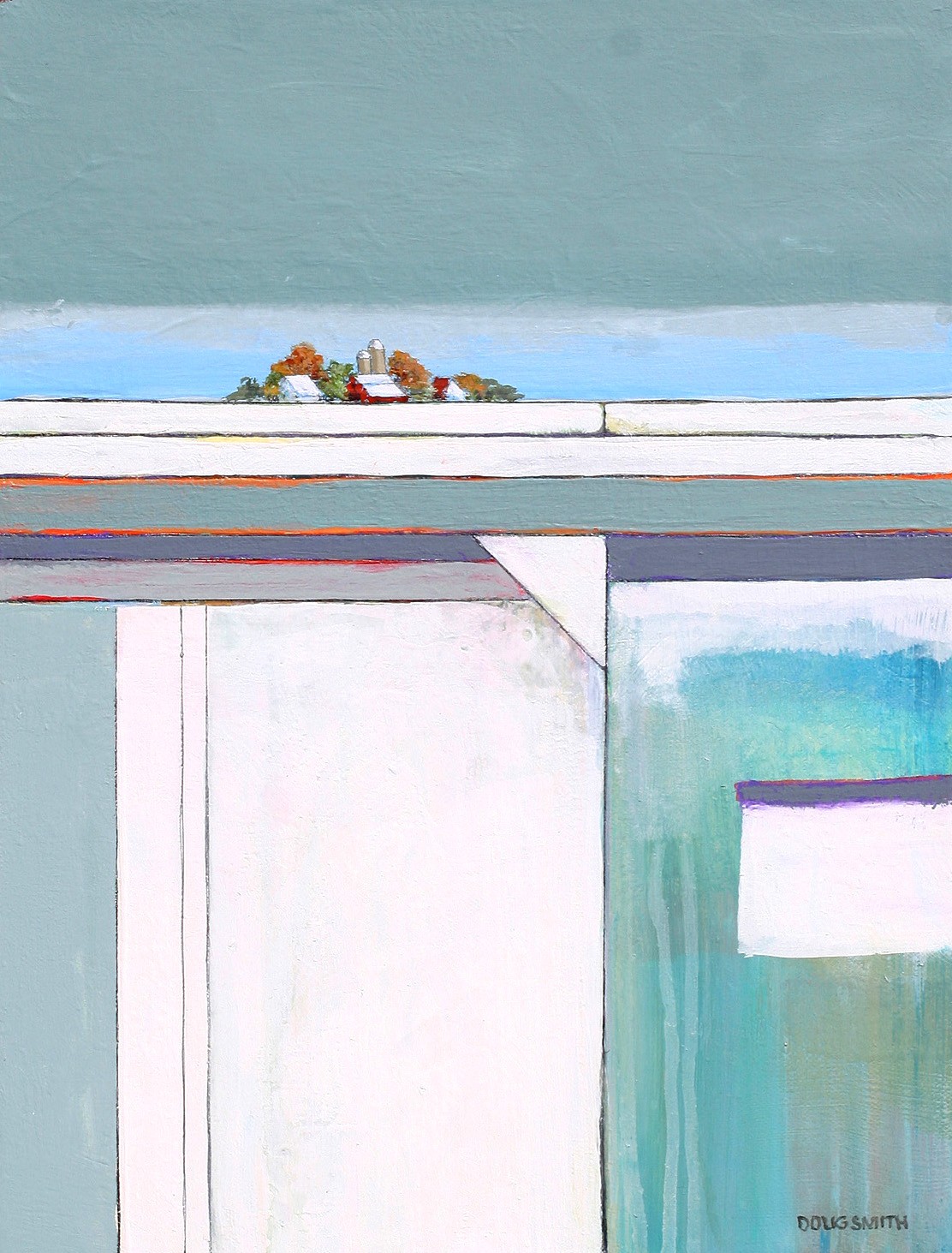 MADE IN THE USA

The lovely teals and slate hues create a colder abstraction lying beneath a quaint structure. 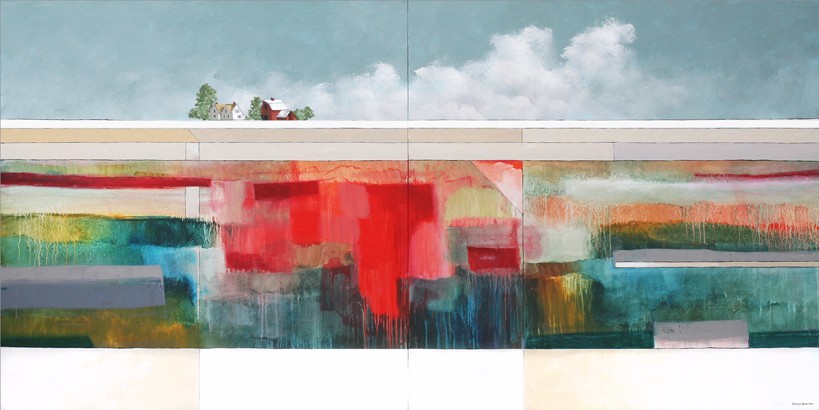 JUST ARRIVED and a perfect fit over any couch or bed with the popular “Doug Smith” red! This diptych is the only one that I presently have available. It is a lovey example of Abstract and traditional realism.

A DEERE IN THE MEADOW

A spectacular diptych that sold almost immediately. What a wonderful addition to any private collector’s walls! 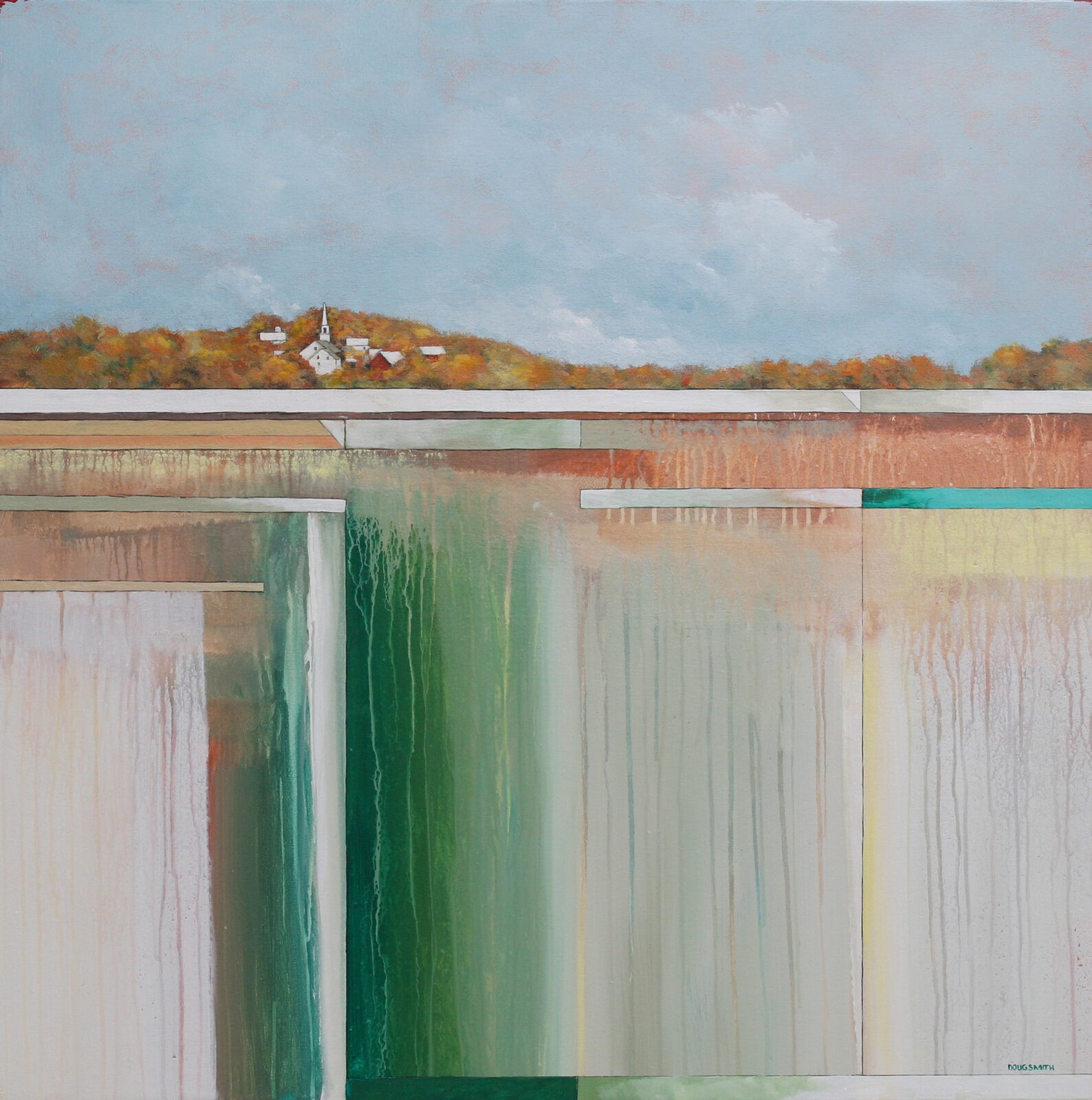 Doug’s first hills in honor of his show October 6th in Vermont. And of course he has added the glory of the Vermont colors! 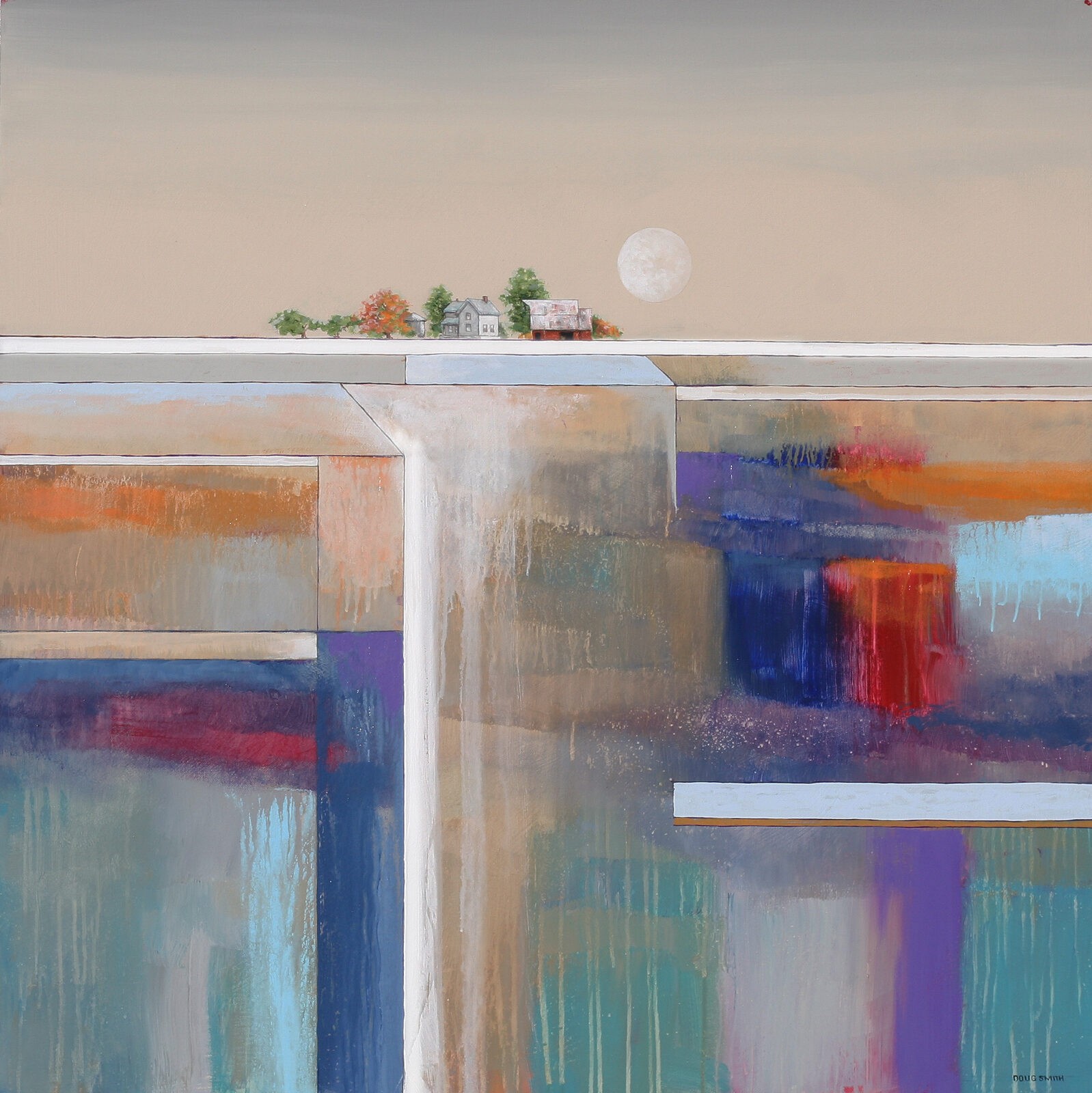 The feeling of nostalgia and calm comes to mind even with the energy produced by the colorful abstract parts. 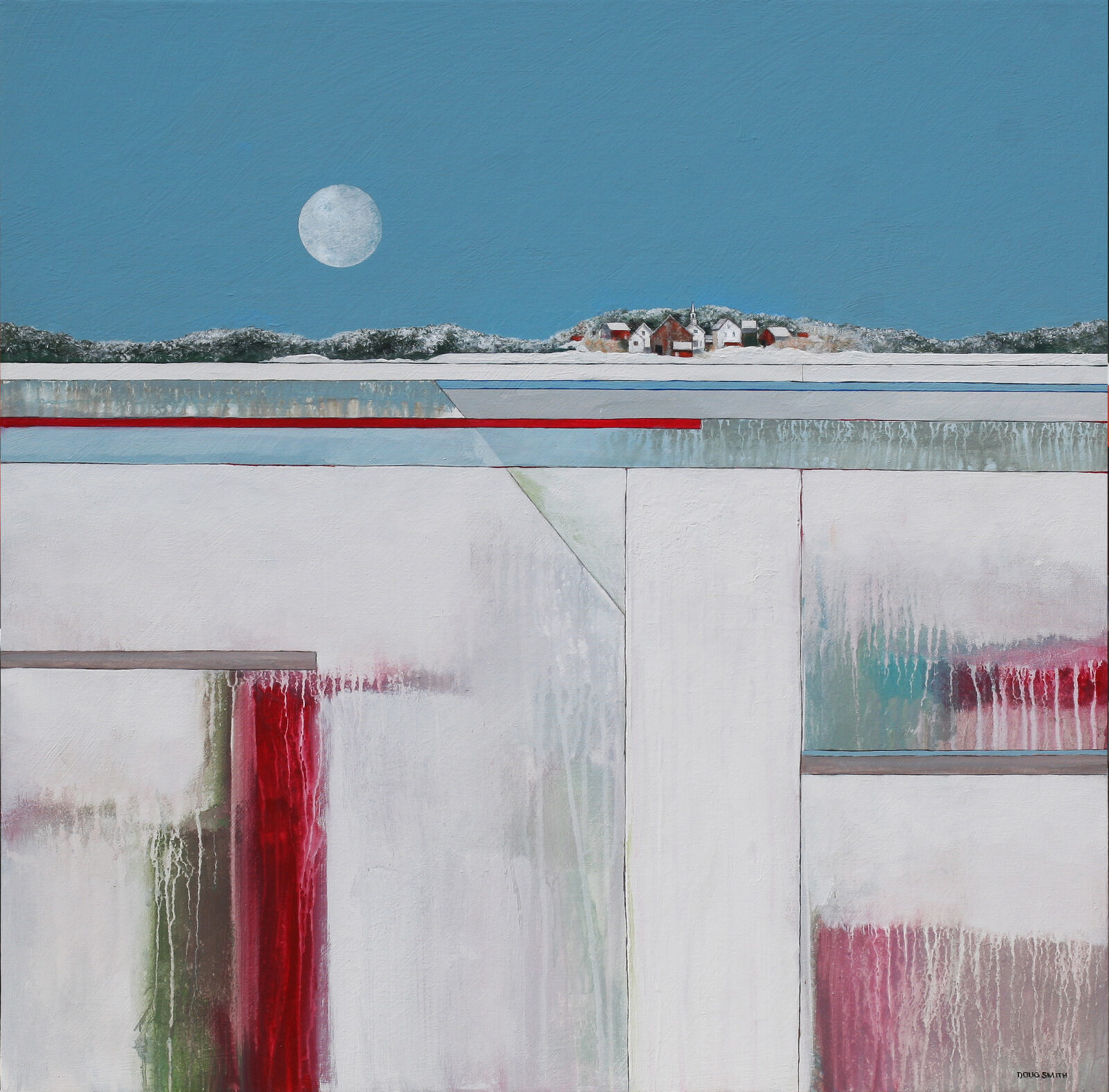 Doug’s abstract shapes and colors with the traditional farm in the winter, imparts a quiet that one can only experience in this snow hushed environment.

FROM THE GROUND UP 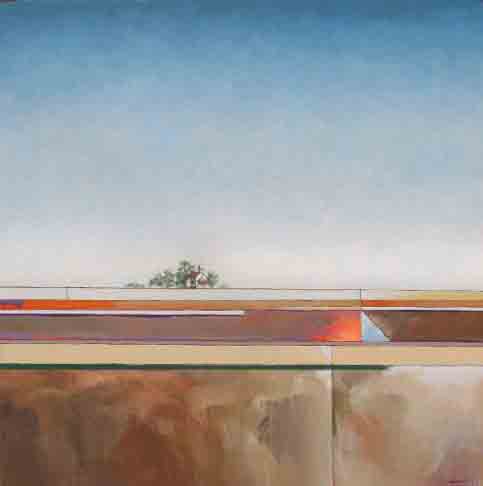 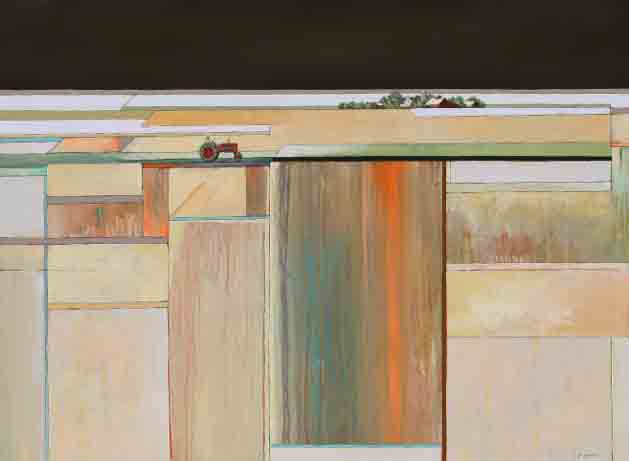 Here is one for all you ‘tractor’ lovers!! 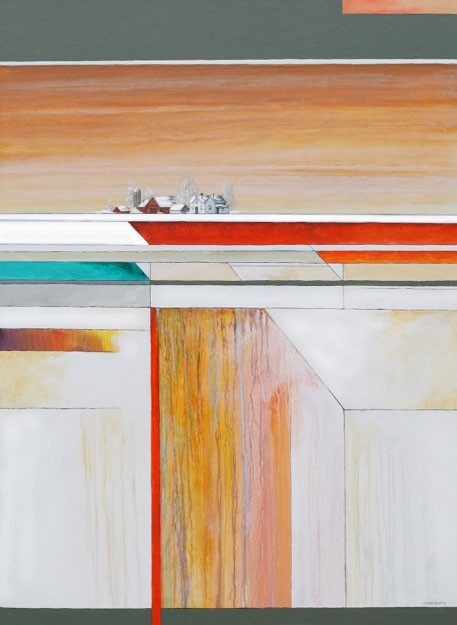 Doug Smith offers a whole new and unique expression for landscapes.  He bridges the gap of abstract expression and traditional realism. 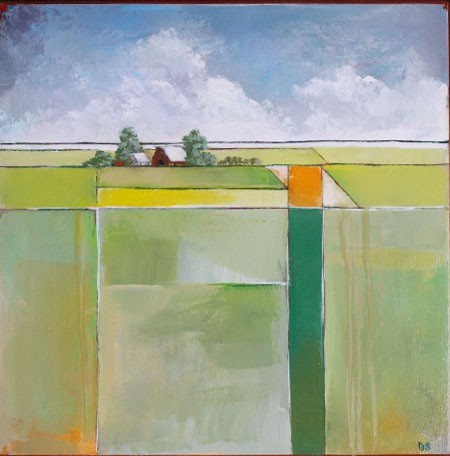 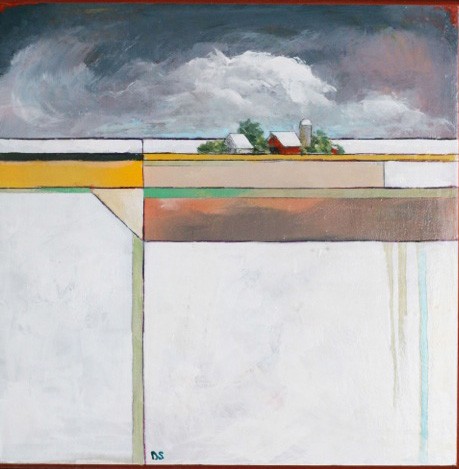 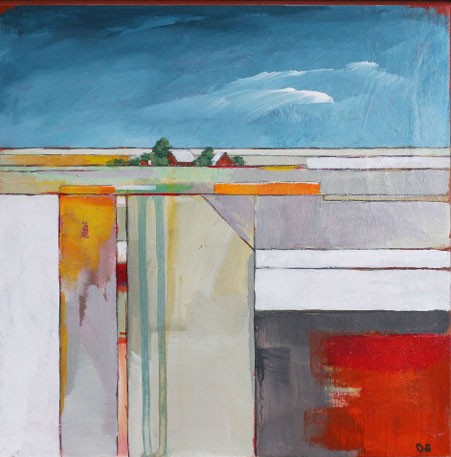